It is no coincidence that the Awards are in memory of African Canadian Harry Jerome. One of the premiere track athletes of his time, Harry’s 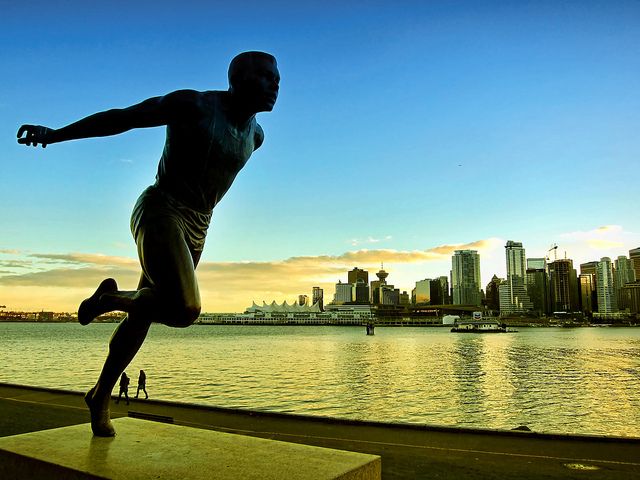 physical successes were partnered with scholastic excellence and social consciousness. Despite his relatively brief life, Harry left a substantial legacy and a blueprint for success.

He was born in Prince Albert, Saskatchewan in 1940. Harry Sr., his wife Elsie and their five children moved to North Vancouver in the 1950s, where they were the only Black people in their conservative neighbourhood.

As Harry’s athletic legend began to grow, he was shy and avoided the limelight. Though labouring under the weight of the country’s expectations and assumptions, Harry went on to set the standard as the world’s fastest man, with records in the 100-metre, 100-yard dash and indoor 60-metre dash. He also helped to set a world record in the 4 x 100-metre relay. Throughout his distinguished athletic career, Harry received numerous accolades at the University of Oregon, represented Canada at two Pan American Games and twice at the Commonwealth Games.

At the 1962 Commonwealth Games in Perth, Australia, Harry suffered a career threatening injury, completely severing his left quadriceps muscle; most orthopaedic surgeons said that he would never run again. The Commonwealth Games were often the site of Harry’s most difficult athletic setbacks, culminating in injury and disappointment almost as often as victory. These obstacles would set the stage for his greatest athletic successes, displaying the true power of his determination and will to succeed.

In spite of the negative reports from the Canadian press about him being a quitter, Harry concentrated on his return. Months of quiet determination, physiotherapy, and courage set the stage for what would later be known as “the greatest comeback.” But his finest moments would come at the Olympics, where he would represent Canada on three occasions.

In 1964, Harry returned to track and field’s largest stage – the Tokyo Olympics. With a 30-centimetre scar on his left thigh, a testament to the severity of his injury, Harry would capture the bronze medal in the 100-metre dash and narrowly missed a second medal in the 200-metre. Proving that this success was no fluke, he would follow his Olympic showing with gold medal performances at both the Pan American and Commonwealth Games.

Despite his athletic successes, Harry was always conscious of the challenges facing African Canadians. At the University of Oregon, he coupled his athletic achievements with scholastic success, earning both undergraduate and graduate degrees in science. He would also turn his athletic accomplishments into opportunities for others. Using his celebrity and sports contacts, Harry would obtain equipment for young athletes who could not afford the expensive gear. He was also involved in extensive work to create opportunities for Blacks outside the sports arena. He was a vocal opponent of the misrepresentation of African Canadians in Canadian television, asking that licenses be suspended “if stations could justify neither having Blacks as on-air personalities nor airing stories about the [African Canadian] community.”

He was equally concerned about the opportunity for economic development among African Canadians. He fought to remove wage discrimination barriers against Blacks, and strove to improve mainstream Canadians’ perception of the Black community. Once he wrote to the major department stores questioning the lack of Blacks as models in their catalogues and as clerks in their stores. Despite his stature in the greater community, Harry never forgot about his roots or his role in bringing about positive change.

After his retirement from active competition in 1968, Harry went on to work with the Federal Ministry of Sport. Using his considerable talents, he designed a series of cartoon manuals for coaching instruction and game rules for children. He created the Premier Sports Program for use in schools in British Columbia. Harry revolutionized track and field with the introduction of weight training for sprinters. He was named British Columbia’s Athlete of the Century, and, in 1971, received the Order of Canada as a testament to his achievements.

In 1982, Harry Jerome died suddenly at the age of 42. Despite his passing, he left a considerable legacy that is a source of pride for all Canadians. In 1988, a statue in his honour was erected along the sea wall of Vancouver’s Stanley Park. Both the University of Oregon and the province of British Columbia have recreational facilities that bear his name.

Harry Jerome took on the concerns of a community and a country, epitomizing excellence, determination, and dedication. He truly is a Canadian hero.