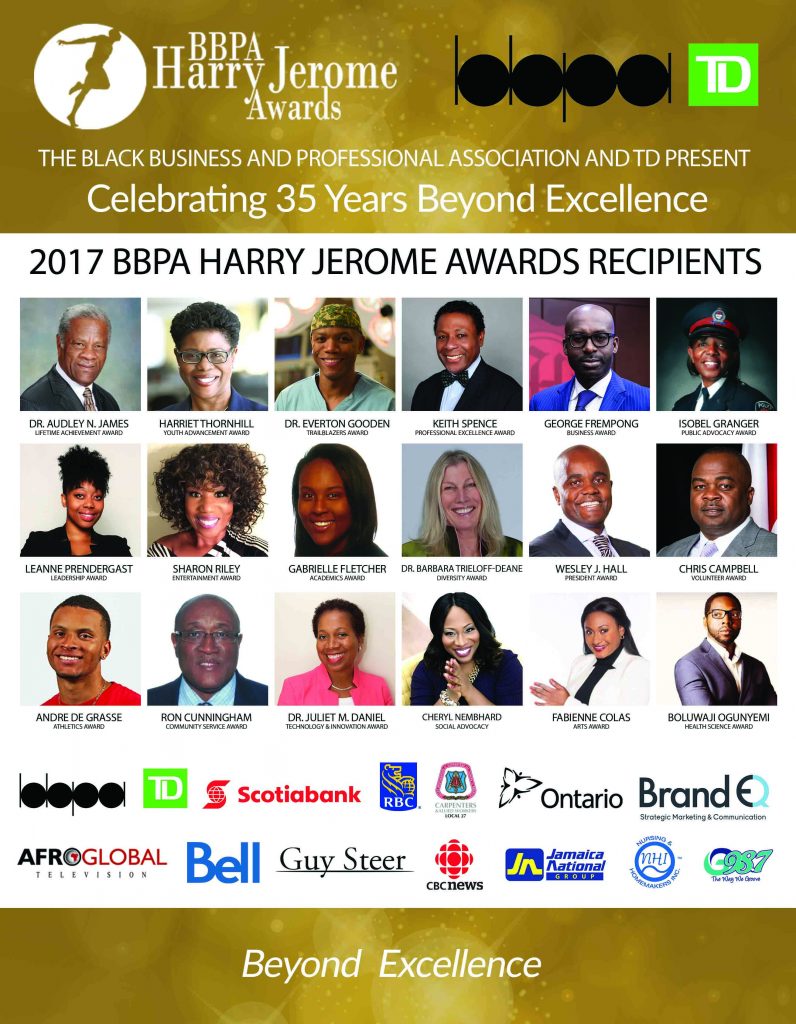 Jerome Awards presented by the BBPA and

According to BBPA President, Pauline Christian, “The winners of the BBPA 35th Anniversary Harry Jerome awards are truly symbolic of this year’s theme ‘Beyond Excellence’. As the BBPA celebrates this significant milestone alongside Canada’s 150th Birthday, it is our hope that the entire Canadian family will come onside in acknowledging the United Nation’s Decade of recognizing people of African descent, 2015 – 2024.”

Established in the memory of Harry Jerome, an outstanding African Canadian Olympic athlete, scholar and social advocate, the BBPA Harry Jerome Awards is an annual celebration that pays tribute to outstanding and inspirational African-Canadians.

“The theme, ‘Beyond Excellence’ is such a prophetic focus that each of us can grab hold onto; it is with this mindset that will allow us to achieve more than we think or can imagine. This is how we tap into our unlimited potential.” states Michelle Richards, Chair of the Harry Jerome Awards.

The BBPA is proud to honour and celebrate the following award winners:

This year we will also bring recognition to these individuals who have contributed immensely to our community:

About the Black Business and Professional Association (BBPA):
Founded in 1983, the BBPA is a charitable organization whose mission is to advance Canada’s Black community by facilitating the delivery of programs that support business and professional excellence, higher education and economic development.  The BBPA presents the Annual Harry Jerome Awards, the BBPA National Scholarships and the National Black Business and Professional Convention (NBBPC), alongside workshops and programs at the BBPA Centre of Excellence.
For more information, please visit us online at www.bbpa.org, call 416-504-4097 or email marketing@bbpa.org.